Been longer than I would have liked between posts, just haven't been able to give this as much time as I've wanted recently. For one, I've been busy at work with some coffee and wine reviews, so I can't really write about the exciting things I've been drinking here until I finish my articles and get them out. Second, I have an infant that doesn't want to be put down at all, ever, so typing with one had and holding a squirmly little boy takes more skill than I currently possess.

Nonetheless, I wanted to put out some coffee tasting notes.

The first is Ritual Roasters' Ndumberi Peaberry (coffee bean variety SL-28). Ritual's notes said this coffee had strawberry shortcake, raspberry and lemon curd in the cup. I got more dried red berry fruits, like raspberries. This coffee had a huge acidity component to it, which I liked.

The second coffee I had was Barefoot Roasters' Guatemalan FVH Edlyna. Purchased at Whole Foods for $11.99, this coffee had a lovely silk body, with subtle berry flavors and some wood and melted butter notes.
Posted by rsdrinks@gmail.com 1 comment:

I have a fondness for Greek wines, even if I only drink it very rarely. That's because I first started drinking wine on a regular basis when I was studying abroad in Greece during college.

I remember not liking red wine at first, because it was served warm, and I couldn't comprehend drinking a warm, or room temperature beverage with food (that's an American thing, apparently).

Still, the novelty of being able to buy alcohol at will (I was only 20) and the idea of drinking wine with dinner as what sophisticated people did, compelled me to try the various bottles on the shelves.

It wasn't long until I was exploring the wines of Greece, and loving every glass, from Xinomavro wines of Naoussa to Agiorgitiko wines of Nemea, as well as the sweet, dark dessert wine Mavrodaphne to the cheap, available in every bar, pine sol tasting Restina.

After I moved back to the US, I continued drinking wine on a regular basis, but shifted to the cheap wines I found here, which were mainly California plonk.

When I moved to California, and Oakland specifically, I came across a wine shop called Du Vin Fine Wines in Alameda that specialized in Greek wines (they have a good selection of Portuguese and Italian wines as well).

As I'm on an obscure Italian wine kick, I decided to see what they had last weekend. I was able to get a Lacrima di Morro, my current favorite red, and I asked him to suggest an off-beat white wine as well. The main one he wanted to sell me was out, but he suggested instead the 2008 Skouras White, a 60/40 blend of Roditis and Moscofilero, two native Greek grapes. As a bonus, the bottle was only $10.99.

Back home, I found this wine to have an earthy nose with a slight blue cheese mold tint to it. In the mouth, this dry wine had bright acidity and seemed to have a slight effervescence. Steely while cold, flavors of almonds and honey appeared as it warmed.

Overall, and interesting wine for $10.99, but nothing too exciting. I believe the wine the shop owner wanted me to try was a 100 percent Moscofilero, which the site All About Greek Wine describes as "A distinct aromatic grape from within the AOC region of Mantinia, in the Peloponnese, Moschofilero grapes have a gray colored skin and therefore produce a wine that is a blanc de gris. Its crisp character and beautiful floral aroma of roses and violets with hints of spices can be drunk as an aperitif or with food." Sounds good - I'll have to seek something like that out!
Posted by rsdrinks@gmail.com 2 comments:

A few years ago I took some friends of mine to a wine trip to Livermore. They had wanted to visit Napa, but I've spent too much time stuck in traffic waiting to get to packed tasting rooms where the winery charges $10 for three little tastes, then offers you the option of tasting "reserve" wines for $15 more, and a futher "library" tasting for another fee. You can spend $40 in a tasting room trying wine without yet buying a bottle, which are themselves $40 and up. Plus you're fighting crowds.

Livermore has dozens of wineries, many that are smaller operations. Some of these I visited were literally in the garage of the grape grower. While you may not get astounding wines at every stop, you're bound to find a few great ones that won't cost you a ton of money simply because it was made in Napa.

One of the places we visited was Thomas Coyne Winery, a hard to find but worth visiting location in south Livermore. Specializing in Rhone and Bordeaux varietals, winemaker Thomas Coyne (pronounced "Coin") started making wine in 1989. The winery itself is on a hill in the middle of in an 1881 building built by French engineer Alexander Duvall. You can see Mt. Diablo in the background, and overall it's a really pretty place to try some wines.

All of the wines I tried tasted great, and I in particular liked the Petit Verdot. You can get these at Whole Foods as well.

The Petit Verdot, priced at $18, looked as black as night in the glass. On the nose, I found sweet jammy black fruit, and this followed in the mouth, as it presented ripe blackberry jam with a touch of vanilla and heat on the finish. Really thick mouthfeel, with the fruit flavors sparkling as a bright beam.


From the winery: "This little-known Bordeaux Varietal is normally reserved for blending to enhance color and body of the major varietals. The grapes came from a vineyard near Lodi in Northern California. After crush and fermentation, the wine was aged in American and French oak barrels for eighteen months. The wine is full-bodied in character with intense herbal flavors and rich oak finish."
Posted by rsdrinks@gmail.com No comments:

We were having some friends over for dinner last night, with a plan to make pasta and sauce from scratch, so when I was at Whole Foods looking for a wine to match, I naturally gravitated toward the Italian section. I have also been on a huge Italian kick as of late, exploring the country's many indigenous grape varieties.

Sangiovese is one native grape that's used in a variety of wines, including Chianti, Super Tuscans and Vino Nobile di Montepulciano. This particular bottle, the 2008 Tiamo Sangiovese, was affordable, at $10.99, made with organic grapes(my friends are really into that) and came from the Marche region, an area that I've found to make really good wines.

This bottle, unfortunately, wasn't a good example. I found it to be extremely over oaked, and the signature Sangiovese cherry flavors watered down. If I had to guess, I'd assume the grape grower didn't reduce their yields enough to produce concentrated wines, and then to compound the problem, used barriques (small wooden barrels) which gave this wine ultimately too much woody flavor.

I've been telling anyone who will listen that cheap European wines outshine their American counterparts, though here's a case where that theory didn't hold up.

In general though, a $10 bottle of wine from Europe will likely express more pure fruit and varietal correct flavors than a wine made in the U.S., especially California, where the cheaper wines aim for the supposed mass market desire for vanilla and oak tasting wines.

I think things are changing here, as I've seen more examples of wines made with a light touch, but if I want to play it safe in the wine shop, I'll head toward the Euro section.
Posted by rsdrinks@gmail.com 2 comments:

My mom has been getting me gift certificates to Acton, Massachusetts-based Terroir Coffee for my birthday for the past couple years, and I recently cashed in by splurging on several offerings, including the second place winner in last year's Bolivian Cup of Excellence from the Flor de Mayo farm. The coffee cost a stiff $27.95 for 8 ounces, an amount I probably wouldn't spend on my own unless the coffee was crazy good.

As an espresso, the coffee was devoid of bitterness, showing complex, subtle flavors that were hard to pick apart. I think I got some papaya and mango in there.

Prepared via inverted Aeropress, I got wonderful floral aromas of lavender and lilacs, reminding me of an astounding Italian wine called Lacrima di Morro d'Alba. I'm talking huge aromatics here (in both the coffee and wine) that are beautiful to behold. In the cup itself though the flavors aren't as strong, and I got chocolate and hazelnut notes in the finish. As for mouthfeel, this coffee was richer than other Central American coffees I've had, almost feeling a bit like butter but not quite there.

The Cup of Excellence jury awarded the coffee 90.85 points, describing it as "bright, balanced," and added it had flavor-aromas of chocolate, orange, caramel, peach, honeycake, blueberry, green apple, with a "lingering mouthfeel, complex, well balanced, subtle."

I believe I got the last batch from Terroir as I don't see it on their site anymore. If I'm going to spend $30 on 8 ounces of coffee, I'd like something a little more powerful, but overall I enjoyed this, especially since I didn't pay for it myself.
Posted by rsdrinks@gmail.com No comments: 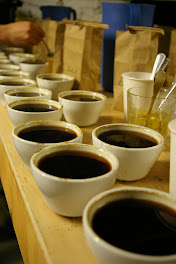 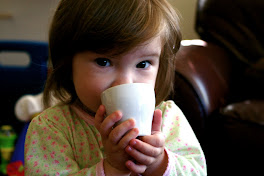